I think the magical restorative flower depicted on the Shield of Dionysos is the one that Óðr (either alone or with his comrades) went searching for when the Gods of Ásgarðr were suffering from the theft of Iðunn’s golden apples, as well as the μῶλυ flower which Hermes gives to Odysseus. What we’re seeing are different stages of an underlying myth, scattered through diverse and seemingly unrelated sources.

And I think another stage of this myth involves a confrontation with a Giant, before the long sought for flower can be recovered. This Giant is either one-eyed or three-headed, and can change its shape into that of various animals – most commonly an eagle or a snake.

Note that Nonnos recounts Ganymedes’ abduction by the giant golden eagle as a prelude to the story of Moria, Damasen and Tylos; Ganymedes represents youthful vitality, just like Hebe did before he replaced her as cup-bearer of the Gods. While in the Norse it is her fruit rather than Iðunn herself that is stolen, that theft is performed by Þjazi, a Giant who turns himself into an eagle. And Odysseus has to face off against the Laistrygones and Polyphemos (both terrible, uncivilized, maneating offspring of Poseidon of immense size) before he can make it to Aiaíā and receive Hermes’ benefaction. (Kírkē’s fabled abode is called “Eagle Island” by the way, from the Greek aietos, eagle.)

This is what I had in mind when I mentioned the possibility of a lost myth in connection with the dolphin coins of Olbia. It’s also possible I’m making this myth up as I go, or that there is a myth but I’m forging connections that don’t exist or are tenuous at best. Remember what I said about biases? Don’t think I’m immune to that, just because I’m clever!

However, if I’m right I believe that a great deal of this myth has been depicted on the Golden Horns of Gallehus. I’m not going to bombard you with a ton of links (though man have I researched the hell out of these things) but I will suggest you start with these four  here, here, here and especially here. Obviously I don’t agree with all of the ideas expressed therein but a rough picture should start to emerge by the time you’re finished with them. 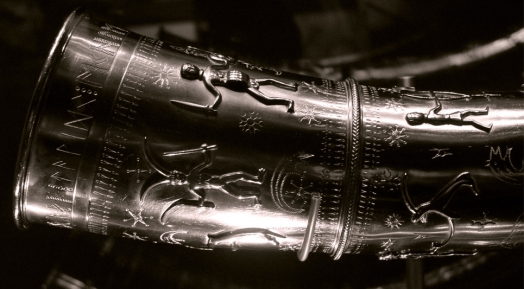 2 thoughts on “The Quest for the Flower”