Here is a Boiotian shield depicting Dionysos with protective vines: 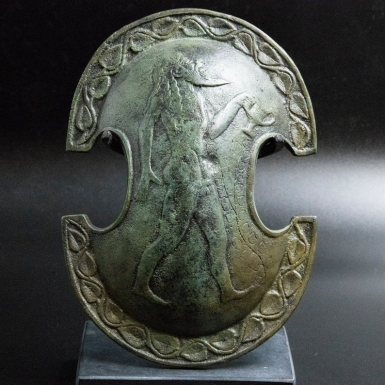 However that is not the shield I mean. Dionysos’ shield is described by Nonnos of Panopolis in the 25th book of his Dionysiaka. Although there’s a lot going on, all of it significant on one level or another, I’m going to bold the portion I think you’ll find particularly relevant in light of our present conversation.

But now that Dionysos had heard the Mother’s inspired message, he mingled thyrsus-mad with the Bacchant women upon the hills. He threw to the winds his burden of anxious pain, as he shook the shield curiously wrought, the shield of Olympos, the clever work of Hephaistos.

Multitudes gathered to look at the varied wonders of Olympian art, shining wonders which a heavenly hand had made. The shield was emblazoned in many colours. In the middle was the circle of the earth, sea joined to land, and round about it the heaven dotted with a troop of stars; in the sky was Helios in the basket of his blazing chariot, made of gold, and the white round circle of the full moon in silver.

All the constellations were there which adorn the upper air, surrounding it as with a crown of many shining jewels throughout the seven zones. Beside the socket of the axle were the poles of the two heavenly Waggons, never touched by the water; for these both move head to loin together round a point higher than Oceanos, and the head of the sinking Bear always bends down exactly as much as the neck of the rising Bear stretches up. Between the two Waggons he made the Serpent, which is close by and joins the two separated bodies, bending his heavenly belly in spiral shape and turning to and fro his speckled body, like the spirals of Maiandros and its curving murmuring waters, as it runs to and fro in twists and turns over the ground: the Serpent keeps his eye ever fixt on the head of Helice, while his body is girdled with starry scales. The constellations of the Bears encompass him round: on the point of his tongue is held out a sparkling star, which close to his lips shoots light, and spits forth flame from the midst of his many teeth.

Such were the designs which the master-smith worked on the back of the well wrought shield, in the middle; and to please Lyaios he wrought also the harp-built walls of cowfounded Thebes, when one after another the seven gateways were a-building in a row. There was Zethos carrying a load of stones on his chafing shoulder, and working hard for his country; while Amphion played and twanged the harp, and at the tune a whole hill rolled along of itself as if bewitched and seemed to dance even on the shield. It was only a work of art, but you might have said, the immovable rock went lightly skipping and tripping along! When you saw the man busy with his silent harp, striking up a quick tune on his make-believe strings, you would quickly come closer to stretch your ear and delight your own heart with that harp which could build a wall, to hear the music of seven strings which could make the stones to move.

The wellrounded shield had another beautiful scene amid the sparkling company of the stars, where the Trojan winepourer was cunningly depicted with art divine being carried into the court of Zeus. There well wrought was the Eagle, just as we see in pictures, on the wing, holding him fast in his predatory talons. Zeus appeared to be anxious as he flew through the air, holding the terrified boy with claws that tore not, gently moving the wings and sparing his strength, for he feared that Ganymede might slip and fall headlong from the sky, and the deadly surf of the sea might drown him. Even more he feared the Fates, and hoped that the lovely youth might not first give his name to the sea below and rob Helle of the honour which was reserved for her in future.” Next the boy was depicted at the feast of the heavenly table, as one ladling the wine. There was a mixing-bowl beside him full of self-flowing nectarean dew, and he offered a cup to Zeus at the table. There Hera sat, looking furious even upon the shield, and showing in her mien how jealousy filled her soul; for she was pointing a finger at the boy, to show goddess Pallas who sat next her how a cowboy Ganymedes walked among the stars to pour out their wine, the sweet nectar of Olympos, and there he was handing the cups which were the lot of virgin Hebe.

Maeonia he also portrayed, for she was the nurse of Bacchos; and Moria, and the dappled serpent, and the divine plant, and Damasen Serpentkiller the terrible son of Earth; Tylos, also, who lived in Maeonia so short a time, was there mangled in his quick poisonous death.

Tylos was walking once on the overhanging bank of neighbouring Hermos the Mygdonian River, when his hand touched a serpent. The creature lifted his head and stretched his hood, opened wide his ruthless gaping mouth and leapt on the man, whipt round the man’s loins his trailing tail and hissed like a whistling wind, curled round the man’s body in clinging rings, then darting at his face tore the cheeks and downy chin with sharp rows of teeth, and spat the juice of Fate out of his poisonous jaws. The man struggled with all that weight on his shoulders, while his neck was encircled by the coiling tail, a snaky necklace of death bringing Fate very near. Then he fell dead to the ground, like an uprooted tree.

A Naiad unveiled pitied one so young, fallen dead before her eyes; she wailed over the body beside her, and pulled off the monstrous beast, to bring him down. For this was not the first wayfarer that he had laid low, not the first shepherd, Tylos not the only one he had killed untimely; lurking in his thicket he battened on the wild beasts, and often pulled up a tree by the roots and dragged it in, then under the joints of his jaws swallowed it into his dank darksome throat, blowing out again a great blast from his mouth. Often he pulled in the wayfarer terrified by his lurking breath, and dragged him rolling over and over into his mouth — he could be seen from afar swallowing the man whole in his gaping maw.

So Moria watching afar saw her brother’s murderer; the nymph trembled with fear when she beheld the serried ranks of poisonous teeth, and the garland of death wrapt round his neck. Wailing loudly beside the dragonvittling den, she met Damasen, a gigantic son of Earth, whom his mother once conceived of herself and brought forth by herself. From his birth, a thick hairy beard covered his chin. At his birth. Quarrel was his nurse, spears his mother’s pap, carnage his bath, the corselet his swaddlings. Under the heavy weight of those long broad limbs, a warlike babe, he cast lances as a boy; touching the sky, from birth he shook a spear born with him; no sooner did he appear than Eileithyia armed the nursling with a shield.

This was he whom the nymph beheld on the fertile slope of the woodland. She bowed weeping before him in prayer, and pointed to the horrible reptile, her brother’s murderer, and Tylos newly mangled and still breathing in the dust. The Giant did not reject her prayer, that monstrous champion; but he seized a tree and tore it up from its roots in mother earth, then stood and came sidelong upon the ravening dragon. The coiling champion fought him in serpent fashion, hissing battle from the wartrumpet of his throat, a fiftyfurlong serpent coil upon coil. With two circles he bound first Damasen’s feet, madly whipping his writhing coils about his body, and opened the gates of his raging teeth to show a mad chasm: rolling his wild eyes, breathing death, he shot watery spurts from his lips, and spat into the giant’s face fountains of poison in showers from his jaws, and sent a long spout of yellow foam out of his teeth. He darted up straight and danced over the giant’s highcrested head, while the movement of his body made the earth quake.

But the terrible giant shook his great limbs like mountains, and threw off the weight of the serpent’s long spine. His hand whirled aloft his weapon, shooting straight like a missile the great tree with all its leaves, and brought down the plant roots and all upon the serpent’s head, where the backbone joins it at the narrow part of the rounded neck. Then the tree took root again, and the serpent lay on the ground immovable, a coiling corpse. Suddenly the female serpent his mate came coiling up, scraping the ground with her undulating train, and crept about seeking for her misshapen husband, like a woman who missed her husband dead. She wound her long trailing spine with all speed among the tall rocks, hurrying towards the herbdecked hillside; in the coppice she plucked the flower of Zeus with her snaky jaws, and brought back the painkilling herb in her lips, dropt the antidote of death into the dry nostril of the horrible dead, and gave life with the flower to the stark poisonous corpse. The body moved of itself and shuddered; part of it still had no life, another part stirred, half-restored the body shook another part and the tail moved of itself; breath came again through the cold jaws, slowly the throat opened and the familiar sound came out, pouring the same long hiss again. At last the serpent moved, and disappeared into his furtive hole.

Moria also caught up the flower of Zeus, and laid the lifegiving herb in the lifebegetting nostril. The wholesome plant with its painhealing clusters brought back the breathing soul into the dead body and made it rise again. Soul came into body the second time; the cold frame grew warm with the help of the inward fire. The body, busy again with the beginning of life, moved the sole of the right foot, rose upon the left and stood firmly based on both feet, like a man lying in bed who shakes the sleep from his eyes in the morning. His blood boiled again; the hands of the newly breathing corpse were lifted, the body recovered its rhythm, the feet their movement, the eyes their sight, and the lips their voice.

Cybele also was depicted, newly delivered; she seemed to hold in her arms pressed to her bosom a mock-child she had not borne, all worked by the artist’s hands; aye, cunning Rheia offered to her callous consort a babe of stone, a spiky heavy dinner. There was the father swallowing the stony son, the thing shaped like humanity, in his voracious maw, and making his meal of another pretended Zeus. There he was again in heavy labour, with the stone inside him, bringing up all those children squeezed together and disgorging the burden from his pregnant throat.

Such were the varied scenes depicted by the artist’s clever hand upon the warshield, brought for Lyaios from Olympos with its becks and brooks. All thronged about to see the bearer of the round shield, admiring each in turn, and praising the fiery Olympian forge.

While they still enjoyed the sight, the daylight crossed the west and veiled the light of her fire-eyed face; quiet Night covered all the earth in her dark shades, and after their evening meal all the people lay down in their mountain bed, scattered on pallets here and there over the ground.

4 thoughts on “The Shield of Dionysos”