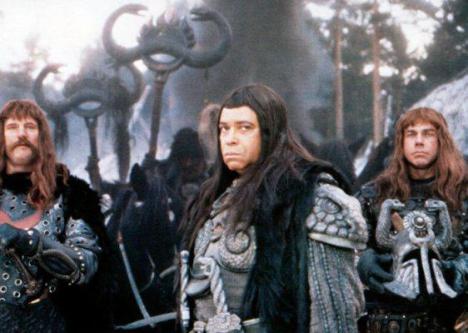 The other day I was watching Conan the Barbarian and noted with some amusement that Thulsa Doom’s orgiastic snake-cult worships the Black Sun.

Although there are numerous references scattered throughout the film one of the most significant occurs during a scene modeled on Herakles’ encounter with the Skythian Goddess (and progenitrix) Argimpasa.

The Witch:
They said you’d come… From the North, a man of great strength… A conqueror. A man who would some day be king by his own hands. One who would crush the snakes of the earth.

Conan:
Snakes? Did you say snakes?

Conan:
A standard. A symbol. Perhaps on a shield. Two snakes coming together… Facing each other! But they’re one.

The Witch:
With… With a sun and a moon below. Black Sun. Black Moon.

The Witch:
… There is a price, barbarian!

So, does that make Conan part of Starry Bear lore?

Talk about coming full circle; though other authors have had a greater stylistic influence, it was Robert E. Howard who actually made me want to become a writer. (Along with Karl Edward Wagner, who published a number of Howard pastiches and even penned the script for a third Conan movie before the project was aborted by cowardly, money-grubbing studio heads which indirectly led to Wagner’s descent into madness, perversion, poverty, alcoholism and premature death.)

Fun story! For my 18th birthday I went on a pilgrimage to visit Robert E. Howard’s old stomping grounds; unfortunately I got the name wrong when booking and ended up almost the entirety of Texas away from my intended destination. The little border-town was full of squalor and decay, baroque and often broken statues of Mary and weeping Angels, vacant-eyed people waiting on their stoops for death to claim them and a three-legged dog so thin you could count his ribs which followed close behind me for about five or six blocks. The air was hot as a furnace blast and so humid it felt like I was sucking rancid soup into my lungs. I had a long, meandering walk from the Greyhound station to my hotel, and got turned about and outright lost multiple times. I was back on the bus at the crack of dawn, eager to return home though it had taken me three uncomfortable and largely sleepless days to get there, for it felt as if I had just escaped Hell on Earth.

Speaking of which, I wonder how long until the “woke” Twitteratti try to #cancelthulsadoom. Fucking Nazis are everywhere, man.