Óðinn as the Archangel Michael reminds me.

Do you know the face Dionysos wore when he wandered among the Slavs?

If you’re not familiar, here’s some resources you may want to sift through.

I’ve got something in the works, but it’s going to take me a while to stitch all the pieces together.

But I will point out that the serpette or pruning-hook is a very important Dionysian symbol and weapon:

The wines of the neighbourhood of Vevey, especially on the sunny district extending hence to Lausanne, and called La Vaux, enjoy a considerable reputation. The Romans are believed to have first planted the vine on these hills and the discovery of a stone inscribed Libero Patri Colliensi proves that they had erected a temple to Father Bacchus at Collium, a little village now called Cully, on the margin of the lake between Vevey and Lausanne.

A society or guild of very high antiquity called L’Abbaye des Vignerons having for its motto the words Ora et labora exists at Vevey. Its object is to promote the cultivation of the vine and for this purpose it despatches every spring and autumn “experts”, qualified persons, to survey all the vineyards of the district and upon their report and testimony it rewards the most skilful and industrious vinedressers with medals and pruning hooks (serpes d’ honneur) as prizes.

In accordance with a custom handed down from very ancient times, which is possibly a relic of pagan superstition, this society periodically celebrates a festival called la Fête des Vignerons. It commences with the ceremony of crowning the most successful cultivator of the vine, which is followed and accompanied by dances and processions formed of the lads and lasses of the neighbourhood attired as Fauns bearing the thyrsus and nymphs. Father Bacchus in his car and Ceres throned on a waggon filled with wheat sheaves appear in the most classical costume in the midst of their followers. But the procession includes a singular mixture of scriptural characters along with these heathen Bacchanals. Thus Silenus riding on his ass is followed by Noah in his ark and Pomona is succeeded by the spies from Canaan bearing between them the bunch of grapes. A vine press and a forge at work are also exhibited drawn by fine horses. On other days of the fête (for it lasts for several) the spectators are entertained with the native dances and songs of Switzerland performed by the herdsmen and shepherdesses of the neighbouring Alps and the concluding and perhaps the most interesting part of the festivities consists in the bestowing upon a young maiden, the fairest in fame and form in the vicinity, a dower and in the celebration of her marriage with a partner of her choice. (John Murray, The handbook for travellers in Switzerland and the Alps of Savoy and Piedmont) 1865

It was often the subject of poets.

Enough of love; let’s leave for something new
All that to-do, and sing the vineyard knife;
No grower of vines but has recourse to you,
Makes use of you to prune his vines; O knife,
My vineyard knife, my little vineyard knife,
Renewing life, you make my good vines grow,
From which year after year the rich wines flow!

Vulcan, the high gods’ blacksmith, did design
This shape divine, in heaven hammered out
The white-hot steel, and dipped it in old wine
To give the fine edge temper; and the shout
Bacchus gave out proclaimed beyond a doubt
That even devout old Noah could not find
A knife for pruning vines more to his mind.

With vine leaves crowned, young Bacchus brings his slim
Curved blade to trim and bless the fruitful vine;
With flagons old Silenus follows him
And from each rim, in one unbroken line,
Pours down the wine, tries dancing, lies supine;
And for a sign his nose is cherry-red;
Of his great family many men are bred.

Or Épitre by Pierre de Ronsard:

Being a poet, I love Bacchus more than all other gods.
The grape harvest has pleased me above everything.
This purple manna falls.
The barefoot tramplet thrusts
the beaten gush of juice
into the vat.

Battalions march in order upon the hillsides.
One cuts the grapes with pruning knives;
another humps them to the presses in a basket.
One turns the wheel around its whining screw,
another piles the squeezed marc, presses it with a plank;
one holds a straining-basket to the spigot,
another takes the crushed seeds;
one holds the hogshead, another empties wine in.
And the whole press resounds with the brilliant noise of it.

And my favorite, Vyacheslav Ivanovich Ivanov’s The Vineyard Of Dionysus:

Dionysus walks his vineyard, his beloved;
Two women in dark clothing – two vintagers – follow him.
Dionysus tells the two mournful guards – The vintagers:
“Take your sharp knife, my vintners, Grief and Torment;
Harvest, Grief and Torment, my beloved grapes!
Gather the blood of scarlet bunches, the tears of my golden clusters –
Take the victim of bliss to the whetstone of grief,
The purple of suffering to the whetstone of bliss;
Pour the fervent liquid of scarlet delights into my ardent Grail!”

You can read more about him here.

Some even link it to the Wolfsangel or wolftrap. 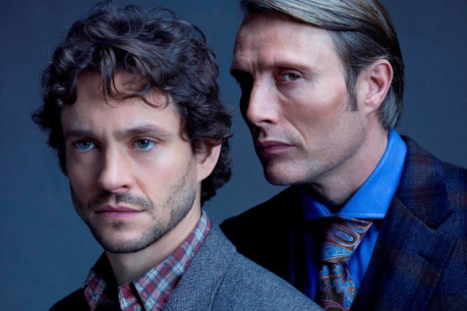 3 thoughts on “your sharp knife”