And I’m hardly the only one to suggest a connection between Dionysos and the Black Sun. There’s also this dude: 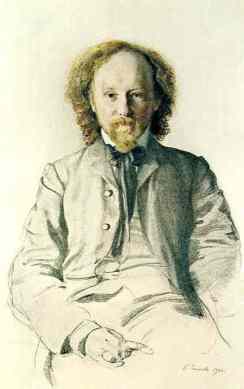 He wrote in The Vineyard Of Dionysus:

Dionysus walks his vineyard, his beloved;
Two women in dark clothing – two vintagers – follow him.
Dionysus tells the two mournful guards – the vintagers:
“Take your sharp knife, my vintners, Grief and Torment;
Harvest, Grief and Torment, my beloved grapes!
Gather the blood of scarlet bunches, the tears of my golden clusters –
Take the victim of bliss to the whetstone of grief,
The purple of suffering to the whetstone of bliss;
Pour the fervent liquid of scarlet delights into my ardent Grail!”

In Germany and Russia there were followers of Dionysus, who shunned the modern world altogether and lived in quasi-Bacchic settings and practiced Dionysian rituals.*

* Blom (2008), 200-2. In Russia, for example, Vyacheslav Ivanov (1866-1949), classical scholar and author of The Hellenic Religion of the Suffering God (1904), lived in ‘The Tower’ believing he was Dionysus from 1905 onwards. In Germany there were numerous bearded and naturist followers of Dionysus, including the young Herman Hesse.

He was quite the interesting fellow, according to James H. Billington:

‘Viacheslav the Magnificent’ was the crown prince and chef de salon of the new society, which met in his seventh floor apartment ‘The Tower,’ overlooking the gardens of the Tauride Palace in St. Petersburg. Walls and partitions were torn down to accommodate the increasing numbers of talented and disputatious people who flocked to the Wednesday soirees, which were rarely in full swing until after supper had been served at 2 A.M.

We lived in the middle of a vast country as if on an uninhabited island. Russia was illiterate, whereas in our milieu was concentrated all the culture of the world: the Greeks were quoted by heart, we welcomed the French symbolists, we thought of Scandinavian literature as our own, we were familiar with the philosophy, theology, poetry and history of the whole wide world, in this sense we were citizens of the universe, the keepers of mankind’s cultural museum. This was Rome in the time of its decline… We played out the last act of the tragedy concerned with the rift between the intelligentsia and the people. Beyond us stretched out the Russian Empire’s snowy desert, a country in fetters: it was as ignorant of our delights as of our anguish, while its own delights and anguish had no effect on us.

Jesús Ángel Espinós writes in The realm of Hades and its symbols in Mandel’štam’s Tristia: a transparent path to redemption:

So, through the mediation of bees and their honey Persephone softens her gloomy character and takes on a new redeemer aspect through which the bees, probably a metaphor of the souls of the dead, transmute their honey into sun, and consequently transcend their earthly existence, as can be observed in the final verses of poem I, 208:

Take for joy my wild gift,
A homely and dry necklace
Of dead bees who transformed
honey into sun.

The last word of the poem, “sun”, inserts itself into a fundamental network where metaphors pertaining to “black sun” and to “night sun” claim attention. In both epithets it has been observed as an Orphic influence that refers to Dionysus Nyktelios, the “Dionysus of the night sun”. Broadly speaking, the imagery of both suns, particularly that of the “night sun”, has to be related to Vjačeslav Ivanov, classical philologist and erudite Symbolist poet, who exerted a great sway on Mandel’štam, especially in his youthful years. Ivanov employs the image of “night sun” in several works such as in the articles ‘Мысли о символизме’ (‘Thoughts about Symbolism’), ‘Орфей’ (‘Orpheus’), in the essay ‘Взгляд Скрябина на искусство’ (‘Skrjabin’s View of Art’), and in the poems ‘Ночное солнце’ (‘Night Sun’) and ‘Сердце Диониса’ (‘Dionysus’ Heart’) among others. Orphic rituals enable us to expiate the guilt inherited from the Titans, and consequently avoid the pu-nishments of afterlife and the cycle of reincarnations. In addition, Plutarch suggests that there must have been a work dedicated to Dionysus Nyktelios, which probably described the mourning for the god’s death and the orgiastic rites in honor of his rebirth. Nevertheless, in spite of Plutarch’s witness, the existence of such a work, perhaps an epic poem called  Νυκτέλια, cannot be proved. In this hypothetical poem the initiates would be instructed in the symbolic meaning of the night, which should be explained by the opposition night/day, shadow/light, an opposition that can be observed in the Mandel’štamian oxymora “night sun”, and to a lesser extent “black sun”. On the other hand, this interrelation of opposite qualities can be traced back to Ivanov, who closes his poem ‘Ночное солнце’ (‘ Night Sun’) with the following command: “В полночь зови незакатный свет!” (“At midnight call the never setting light!”; v. 7). In sum, from this point of view, the Orphic sun of poem I, 208 (v. 15), created by the honey of dead bees, should be understood as a sun of salvation that, under the appearance of a Dionysus reborn, would set us free from the continuous and numerous gloomy metaphors that dot Mandel’štam’s Tristia. On the other hand, the bees were a symbol of poetic talent in classical Antiquity as must be inferred from the recurrent scene of bees that perch on the lips of future poets when they are still in the cradle or that, in the case of the young Pindar, even build a honeycomb on his lips according to Pausanias (Description of Greece IX, 23, 2), or feed him with honey as Philostratus (Images II, 12, 2, 4) states. So, I might venture that the bees, by means of their poetic force, defy death, which is the same as saying that poetry, incarnated in the honey, reveals itself as immortal.

Regarding this imagery, Terras remarks: “We know that precisely at the time of Mandelstam’s intensive contact with Ivanov, the latter was lecturing on Novalis and translating his poetry and, in particular, his Hymnen an die Nacht. In the very first of these hymns we find a ‘liebliche Sonne der  Nacht,’ translated as Mne solntsem ty polunochnym siiaesh’, ‘You shine for me as a midnight sun’ […]. The not inconsiderable role played by Novalis in Mandelstam’s thought […] is surely due to Ivanov’s mediation.” (The Black Sun: Orphic Imagery in the Poetry of Osip Mandelstam. SEEJ, 45, No. 1, 45-60.)

8 thoughts on “Also not a Nazi”