A couple years ago I had a bunch of #bacchiclivesmatter buttons printed as part of a fundraiser to help out a community member in need, and my wife has been selling the remainder through her Etsy shop.

Until tonight, when I asked her to delete the listing.

Originally I had wanted to draw a parallel between the systemic oppression suffered by the Bacchic Martyrs and what’s happening in our streets today with our increasingly militarized police force, and also to show solidarity with what I perceived to be a well-intentioned liberation movement. As BLM’s ideology and methodology became clearer I regretted making that comparison, but kept the listing up anyway.

Partly that was to honor and educate folks about the Bacchic Martyrs and partly it was a great big middle finger to all the butt-hurt lefties who whined at, harassed, threatened and otherwise attempted to intimidate my wife into taking them down. Perhaps if they had been reasonable and respectful we might have considered it. But when their demands were not immediately met they’d proceed to spazz out and a couple incidents got so bad I had to step in and give them what for. (And how fucked is it that they had no problem behaving that way towards a woman, but when confronted by a man they all tucked tail and ran? Neopaganism has some serious misogyny issues it needs to address before it presumes to offer moral chastisement to others, and that applies especially to the Tumblr trash contingent.)

Well, anyway, I find BLM’s behavior over the past couple weeks so contemptible that I want no association with them, and thus will no longer use that hashtag or sell the buttons. I may give the couple we have left away during some future contest, but I’d feel dirty accepting money for them now.

Oh, and Shaun King? You should definitely go into a church in a working class Italian neighborhood and start desecrating/destroying all their statues and paintings of the Madonna. Yeah, that’s a really good idea there, buddy. So good that all your followers should try it. In fact y’all should branch out to Irish, Latino, Greek and Russian parishes too!

I’m kidding, of course. That’s a seriously bad idea. Even leaving aside how this will be received by the church members in those places (hint: not well) do these look like divinities you want to fuck with? 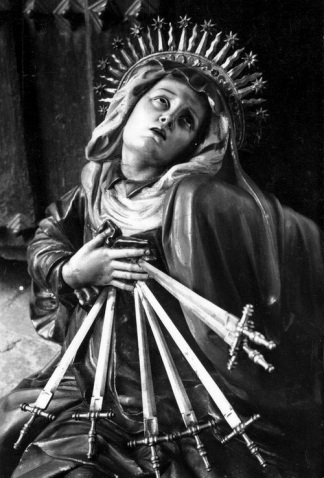 I’ve read The Bakchai. I know what happens when you insult a God’s mommy. And I’ve read Veiled Threats and Madonnas That Maim too. Italian Folk Catholic Mary is terrifying. Trust me, you’d much rather have JC pissed at you.

But you do you boo.

I’m gonna have so much fun watching this play out.

Alright, back to my hiatus.

6 thoughts on “you do you boo”