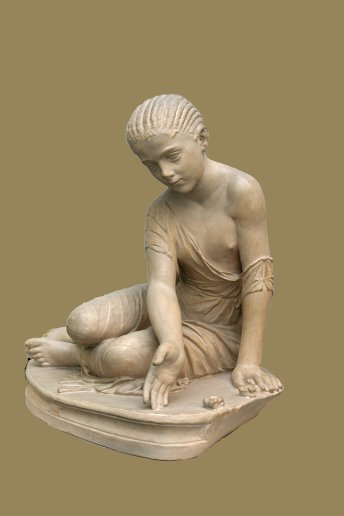 Plutarch, Aetia Graeca 12
The Delphians celebrate three festivals one after the other which occur every eight years, the first of which they call Septerion, the second Heroïs, and the third Charilla. The greater part of the Heroïs has a secret import which the Thyiades know; but from the portions of the rites that are performed in public one might conjecture that it represents the evocation of Semele. The story of Charilla which they relate is somewhat as follows: A famine following a drought oppressed the Delphians, and they came to the palace of their king with their wives and children and made supplication. The king gave portions of barley and legumes to the more notable citizens, for there was not enough for all. But when an orphaned girl, who was still but a small child, approached him and importuned him, he struck her with his sandal and cast the sandal in her face. But, although the girl was poverty-stricken and without protectors, she was not ignoble in character; and when she had withdrawn, she took off her girdle and hanged herself. As the famine increased and diseases also were added thereto, the prophetic priestess gave an oracle to the king that he must appease Charilla, the maiden who had slain herself. Accordingly, when they had discovered with some difficulty that this was the name of the child who had been struck, they performed a certain sacrificial rite combined with purification, which even now they continue to perform every eight years. For the king sits in state and gives a portion of barley-meal and legumes to everyone, alien and citizen alike, and a doll-like image of Charilla is brought thither. When, accordingly, all have received a portion, the king strikes the image with his sandal. The leader of the Thyiades picks up the image and bears it to a certain place which is full of chasms; there they tie a rope round the neck of the image and bury it in the place where they buried Charilla after she had hanged herself.