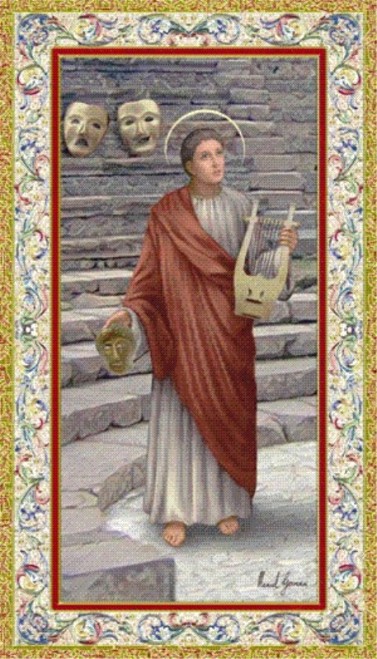 The danger of wearing a mask, of course, is that in time you may end up becoming that which you pretend to be. This truth of the theater is perfectly illustrated in the tale of Saint Genesius of Rome, as recounted on the Orthodox Wiki:

Genesius was a gifted actor, comedian, playwright and the leader of a troupe of actors in Rome. When Diocletian initiated his great persecution, Genesius, who was a pagan, hatched a grand scheme to construct a play parodying the Christian Sacraments, to expose them to the ridicule of the audience. Thus he resolved one day to represent Baptism, with all its ceremonies, as ludicrously as possible. To this effect he became well acquainted with all that takes place at holy Baptism, he appointed the parts for the play, and instructed the actors as to what they were to do.

On the day of the performance Emperor Diocletian and his court were present. The comedy began, with Genesius acting the principal part. Feigning to be sick, he lay down, calling to his friends to bring him something to relieve his suffering. When they had done this, he said that he felt that he was soon to die, and wanted to become a Christian, and that they should “baptize” him. Everything was brought upon the stage that was used at Baptism, and an actor playing a priest came on stage in order to “baptize” the ailing catechumen. All the questions were put to him which are made to those who are to be baptized. The ceremony was performed in so ludicrous a manner, that the Emperor and all the people shouted with laughter.

At the moment when the pagan actors scoffed and blasphemed the Holy Sacrament of the true Church, as the actor poured the water over his head, the Almighty touched the heart of Genesius and illumined it with a ray of His divine Grace. Seeing the truth of Christianity, suddenly an entire change took place in the actor, and he loudly and earnestly proclaimed his faith in Jesus Christ.

His companions, not knowing what had happened, continued the blasphemous mockery. When the whole ceremony was performed, they threw a white robe over Genesius in derision of the garment usually given to the newly-converted and baptized; thus clothed, they presented him to the people amidst great hilarity. But Genesius, already a true believer in Christ, turned to the Emperor and other spectators and confessed to them with great dignity what had taken place within him. He declared solemnly that until that day, blinded by idolatry, he had scoffed and derided Christianity, and therefore had proposed to represent baptism on the stage, for the amusement of the people. But during the sacrilegious performance, his heart had suddenly changed, and he desired to become a Christian. He said that he had seen the heavens open, and perceived a hand that touched him, when the baptismal water was poured over him. He further stated that before they had baptized him, he had seen an angel, with a book in which all his past iniquities had been recorded, who assured him that they would all be washed away by holy baptism, and that he had in fact seen that all his vices had been obliterated from its pages. After relating this, he added that he renounced idolatry, and believing that Jesus Christ was the Son of God, and the Redeemer of the world, he would henceforth live and die a Christian.

This was the manner of his death:

It soon became clear to the Emperor and the audience that he was no longer acting. The Emperor then became enraged at his noble and frank confession, and gave immediate orders that his garments should be torn from him, and that he should he whipped with scourges and clubs before all the people, and then be cast into prison. Plautian, the prefect, received orders to renew this punishment daily until Genesius would abandon his new faith and sacrifice to the pagan gods. The holy confessor was stretched upon the rack, torn with iron hooks, and burned with torches. As the prefect urged him to submit to the imperial command and sacrifice to the pagan gods.

Plautian, provoked at his fearlessness, reported his words to the Emperor, who ordered him beheaded, which sentence was executed in year of our Lord 303. Thus St. Genesius, who from an idolater became a Christian, and from a scoffer of Christianity a fearless confessor of the Saviour, received the crown of martyrdom.

Hearing of his death, the Christians realized that Genesius had been converted and put to death for the faith. They managed to secure his body and buried him in the Cemetery of St Hippolytus on the Via Tiburtina with other Christian martyrs. When the persecution ended and following the Christianisation of Rome, his remains were exhumed and later solemnly enshrined in the Church of San Giovanni della Pigna near the Pantheon in Rome. The church at Rome which was dedicated in his honour from ancient times, was restored and beautified by Gregory III in A.D. 741. In 1591 his relics were transferred to a tomb in the Church of Santa Susanna where they lie to this day.

Since early times Genesius has been considered the patron saint of actors, actresses, comedians and those who work in the theatrical arts; with the advent of cinema, he is also regarded as its patron. More recently he has also been adopted as a patron of converts, dancers, and epileptics.

Were someone so inclined to pay their respects to Genesius they needn’t visit the bolded locations above; indeed, as it turns out the Patron Saint of Actors, Magicians and Epileptics has a strong cult presence here in New York, according to the regular Wiki. Specifically:

Genesius is said to have been buried in the Cemetery of St. Hippolytus on the Via Tiburtina. His relics are claimed to be kept in San Giovanni della Pigna, Santa Susanna di Termini, and the chapel of St. Lawrence. His legend was dramatized in the fifteenth century. It was embodied later in the oratorio “Polus Atella” of Löwe, and more recently in a play by Weingartner. The accuracy of the Acts, dating from the seventh century, is very questionable, though it was defended by Tillemont (Mémoires, IV s. v. Genesius). Nevertheless, Genesius was venerated at Rome as early as the Fourth Century. A church was built in his honor, and it was repaired and beautified by Pope Gregory III in 741. A gold glass portrait of him dating to the Fourth Century also exists.

The veneration of St Genesius continues today, and the actor-martyr is considered the patron of actors and acting societies, including those that assist actors. The British Catholic Stage Guild regards him as their patron saint, and the Shrine of St. Genesius in Saint Malachy’s Roman Catholic Church in the New York City Borough of Manhattan, serves as a spiritual landmark for the city’s acting community. As the patron saint of epilepsy, many thus afflicted turn to him for his help. Because he is associated with stagecraft, Genesius is also venerated by stage magicians and illusionists. He is one of the patrons of the Catholic Magicians’ Guild.

A Genesian Theatre in Sydney, Australia hosts six seasons each year and is the centre of a vibrant amateur acting community. Other amateur companies around the world also use his name, including the Genesius Guild of Hammond, Indiana, which hosts an average of four productions each year and an annual children’s theater camp, the Genesius Theater of Reading, Pennsylvania, basis for the Lincoln Center production of Douglas Carter Beane’s “Shows for Days” starring Patti LuPone. Genesius Studios, a film production company in New York, New York founded by a group of traveling actors, whose slogan is “Freedom of Thought” and whose focus is producing motion pictures with wayward, lost protagonists and anti-heroes who often find something inside themselves worth standing for in tales of self-discovery, hubris and redemption, among other notably relative themes, and the Genesius Guild and Foundation in the Quad Cities in the United States, which focuses on classical Greek Drama.

A new association in the Roman Catholic Church, The Fraternity of St Genesius, has been founded under this Saint’s patronage. It aims to support men and women who work in theatre and cinema.

One thought on “The Patron Saint of Actors, Magicians and Epileptics”