So, you know my whole theory that Freyja is Kírkē and Óðr is Odysseus, who has forgotten that he is Dionysos?

Well, I found something that could be interpreted as further confirmation.

And I don’t mean this statue of a Bacchic Freyja whose staff is topped by a little dancing Satyr, which Tetra recently posted about: 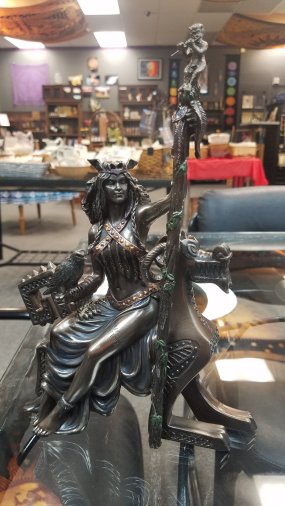 Though that is pretty fucking cool.

Our household actually has one of these, though I use a different eidolon in my personal devotional practice. My mouth hung open like a gasping fish (or dolphin) when I first saw it.

No, what I’m referring to is a passage from George Hinge’s Dionysos and Herakles in Scythia ‒ The Eschatological String of Herodotos’ Book 4, which I was rereading to mine for ideas for the play. Specifically, this passage:

A fragment of a black-glazed kylix found in Olbia carries the very beginning of Odysseus’ own tale in the Odyssey (9.39): Ἰλιο[θεν] µε φ[ερων] ἄνεµ[ος Κικ]ονεσσι [πελ]ασσεν “a wind brought me from Troy to the Kikonians” (= SEG XXX, 933); given that the concept of the wind carrying the soul to and fro was ascribed to Orpheus (Arist. De an. 410b = Orph. fr. 27 Kern), and the Thracian Kikonians and their king Ismaros were connected not only with wine (Od. 9.196-7, Archil. fr. 2.2 West), but also with Dionysos (cf. Ps.-Hes. fr.238 Merkelbach-West), the inscription may be yet another testimony to the character of the Olbian cult of Dionysos.

The Winds or Anemoi were really important in certain strains of Orphism, as Renaud Gagné makes clear in Winds and Ancestors: The Physika of Orpheus. Ditto the more Apollonian/Pythagorean side of the tradition, as Leonid Zhmud shows in Pythagoras’ Northern Connections: Zalmoxis, Abaris, Aristeas (and you yourself may have noticed with how frequently Boreas in particular has been showing up.)

Troy, by the way, is the Labyrinth – and labyrinths are important both in Russia and Scandinavia. Indeed, Snorri Sturluson relates in the Prologue to the Prose Edda (3-4) that the Æsir were originally neighbors and allies of the Trojans:

Near the earth’s centre was made that goodliest of homes and haunts that ever have been, which is called Troy, even that which we call Turkland. This abode was much more gloriously made than others, and fashioned with more skill of craftsmanship in manifold wise, both in luxury and in the wealth which was there in abundance. There were twelve kingdoms and one High King, and many sovereignties belonged to each kingdom; in the stronghold were twelve chieftains. These chieftains were in every manly part greatly above other men that have ever been in the world. One king among them was called Múnón or Mennón; and he was wedded to the daughter of the High King Priam, her who was called Tróán; they had a child named Trór, whom we call Thor. He was fostered in Thrace by a certain war-duke called Lóríkus; but when he was ten winters old he took unto him the weapons of his father. He was as goodly to look upon, when he came among other men, as the ivory that is inlaid in oak; his hair was fairer than gold. When he was twelve winters old he had his full measure of strength; then he lifted clear of the earth ten bear-skins all at one time; and then he slew Duke Lóríkus, his foster-father, and with him his wife Lórá, or Glórá, and took into his own hands the realm of Thrace, which we call Thrúdheim. Then he went forth far and wide over the lands, and sought out every quarter of the earth, overcoming alone all berserks and giants, and one dragon, greatest of all dragons, and many beasts. In the northern half of his kingdom he found the prophetess that is called Síbil, whom we call Sif, and wedded her. The lineage of Sif I cannot tell; she was fairest of all women, and her hair was like gold. […] He who is named Vóden, whom we call Odin: he was a man far-famed for wisdom and every accomplishment. His wife was Frígídá, whom we call Frigg. Odin had second sight, and his wife also; and from their foreknowledge he found that his name should be exalted in the northern part of the world and glorified above the fame of all other kings. Therefore, he made ready to journey out of Turkland, and was accompanied by a great multitude of people, young folk and old, men and women; and they had with them much goods of great price. And wherever they went over the lands of the earth, many glorious things were spoken of them, so that they were held more like gods than men. They made no end to their journeying till they were come north into the land that is now called Saxland; there Odin tarried for a long space, and took the land into his own hand, far and wide.

Which may be where they first met Óðrysseus, before he was carried away by a terrible storm.

Possibly even a Typhoon.