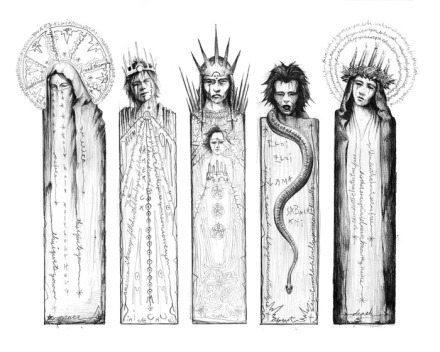 Well, first off, Orphism is more an interpretive methodology than a coherent system of belief; each group operated independently of the others and even when they were using a similar body of myths they often emphasized or elaborated on different elements within them. (In other words, there are no Orphic myths but rather an Orphic treatment of myth, if you get what I mean.)

Secondly, even if one takes the cosmology that modern scholars have reconstructed (using fairly late Neoplatonic sources in the process) I’d hardly describe that as a good example of monism. To begin with that Orphic pantheon consists of a couple dozen entities making it one of the hardest of polytheisms known to the ancient world (they even treat as separate beings I tend to lump together) and secondly it’s only monist in certain phases. And then fairly problematically so.

For those who are not familiar with the cosmology I’m discussing I’ll briefly summarize it.

In the beginning there was an egg. Just an egg, nothing else. Not even time or space or emptiness. Just an egg, because Orpheus said so, alright?

Inside the egg is a bisexual being who is Manifest Light and Love. S/he’s just boogieing down being all lovey and stuff when the motion causes the egg to crack open and all of the primordial elements of creation ooze forth like some kind of yolky substance.

Light’s like, “Wow, I didn’t realize all that stuff was in there with me,” and then one of the primordial elements comes up to Light and says, “Hey. My name’s Night. I can see the future and stuff.”

And Night says, “Want to fuck?”

So Night and Light fuck and they have lots of babies and soon those babies are like, “We need somewhere to live since mom and dad just spend all of their time fucking.”

And so the babies go about reordering the primordial elements into something more suitable for habitation and eventually we end up with a material universal. Light and Night are too busy fucking to notice, however.

Then the babies say, “Hey – which one of us is going to rule everything?” and so they start fighting amongst themselves. Eventually the stronger ones go on to make babies who decide that they want to rule so they kill their parents and then have babies of their own, who then scheme to kill them so they can make babies.

It’s all very violent and sexy and repetitive and eventually we end up with Zeus who’s like, “I enjoy the baby-making part but I don’t want to be killed.”

So he goes and talks with Night during one of the brief moments when she and Light aren’t fucking and Night says, “You have to make the many one.”

Now that he’s the true ruler of everything he puts everything inside of himself so nothing could ever possibly challenge his authority. It kind of sucks being the only thing left in existence: but on the other hand, everything continues running the same as before, it’s all just happening inside him now. That’s right. Your whole existence is being lived out within the belly of Zeus.

And that account (clearly by someone who was tripping balls) is as close as you get to monism in Orphism.

If that’s the kind of thing you want to believe, be my guest. I am clearly not drunk enough to understand it.

I’m going to listen to Sorne, who made the art I opened this piece with.