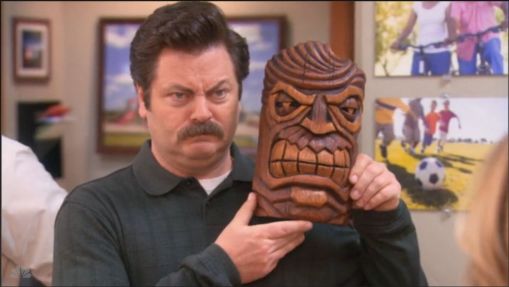 I was reading Matthew Lloyd’s Dionysus, masculinity, and the return of Hephaestus when I came across this interesting detail:

Indeed, Dionysus maintains his appeal to the more traditionally masculine. Nick Offerman, the actor best known for playing Ron Swanson in the sitcom Parks and Recreation, is an avid worshipper of Dionysus. In his 2014 autobiography, Paddle Your Own Canoe he says:

if I had to choose one god to serve, I would choose… Dionysus. The Greek god of wine, song, and theatre. My Eucharist is found in entertaining people, receiving the bread and the wine of laughter and tears from the crowd, and being brought to catharsis by the work of others. When I take the stage, Dionysus (or Bacchus) sees and hears my ministry and he is muchly pleased.

To Offerman, Dionysus is a god of theatre, revelry, and performance.

The public perception of Offerman is that he is a traditionally manly man. This perception is partially based on the character of Ron Swanson, but also on Offerman’s skill at woodworking. In Chapter 7 of Paddle Your Own Canoe, “Enter Dionysus”, he discusses his early time in the theatre and how his skill with his hands supported his theatrical pursuits. Nevertheless, he denies his own manliness – largely because of those Dionysiac tendencies. In a recent interview with Men’s Health, he says: “I went to theatre school. I took two semesters of ballet. I’m the sissy in my family. I cry with pretty great regularity. It’s not entirely accurate to equate me with manliness.” Indeed, even for Offerman Dionysus is not necessarily male – the quotation from Paddle Your Own Canoe above ends: “Or she. No reason to stick with the tired dogma of the patriarchy.”

3 thoughts on “We are everywhere”