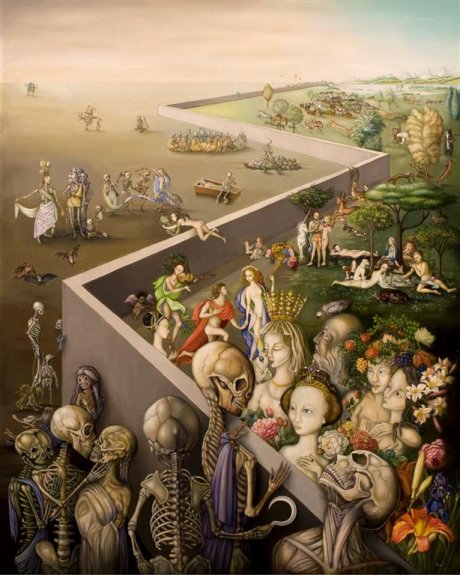 From the Wikipedia article on Thomas Morton
Morton’s religious beliefs were strongly condemned by the Puritans of the nearby Plymouth Colony as little more than a thinly disguised form of heathenism, and they suspected him of “going native”. Scandalous rumours spread of debauchery at Merrymount, which they claimed included immoral sexual liaisons with native women during what amounted to drunken orgies in honour of Bacchus and Aphrodite, or as the Puritan Governor William Bradford wrote in his History of Plymouth Plantation, “They … set up a May-pole, drinking and dancing about it many days together, inviting the Indian women for their consorts, dancing and frisking together (like so many fairies, or furies rather) and worse practices. As if they had anew revived & celebrated the feasts of ye Roman Goddess Flora, or ye beastly practices of ye mad Bacchanalians.”

Morton had transplanted traditional West Country May Day customs to the colony, and combined them with fashionable classical myth, couched according to his own libertine tastes and fueled by the enthusiasm of his newly freed fellow colonists. On a practical level the annual May Day festival was not only a reward for his hardworking colonists but also a joint celebration with the Native Tribes who also marked the day, and a chance for the mostly male colonists to find brides amongst the native population. Puritan ire was no doubt also fueled by the fact that Merrymount was the fastest-growing colony in New England and rapidly becoming the most prosperous, both as an agricultural producer and in the fur trade, in which the Plymouth Colony was trying to build a monopoly.

The Puritan account of this was very different, regarding the colony as a decadent nest of good-for-nothings that annually attracted “all the scum of the country” to the area, or as Peter Lamborn Wilson more romantically puts it, “a Comus-crew of disaffected fur traders, antinomians, loose women, Indians and bon-vivants”. The second 1628 Mayday, “Revels of New Canaan”, inspired by “Cupid’s mother” — with its “pagan odes” to Neptune and Triton (as well as Venus and her lustful children, Cupid, Hymen and Priapus), its drinking song, and its erection of a huge 80-foot (24 m) Maypole, topped with deer antlers — that proved too much for the “Princes of Limbo”, as Morton referred to his Puritan neighbours.

The Plymouth militia under Myles Standish took the town the following June with little resistance, chopped down the Maypole and arrested Morton for “supplying guns to the Indians”. He was put in stocks in Plymouth, given a trial and finally marooned on the deserted Isles of Shoals, off the coast of New Hampshire, until an “English ship could take him home”, as he was believed too well connected to be imprisoned or executed (as later became the penalty for blasphemy in the colony). He was essentially left to starve on the island, but was supplied with food by friendly natives from the mainland, who were said to be bemused by the events, and he eventually gained enough strength to escape to England under his own volition.

The Merrymount community survived without Morton for another year, but was renamed Mount Dagon by the Puritans, after the Semitic sea god, and they pledged to make it a place of woe. During the severe winter famine of 1629 residents of New Salem under John Endecott raided Mount Dagon’s plentiful corn supplies and destroyed what was left of the Maypole, denouncing it as a pagan idol and calling it the “Calf of Horeb”. Morton returned to the colony soon after and, after finding that most of the inhabitants had been scattered, was rearrested, again put on trial and banished from the colonies. The following year the colony of Mount Dagon was burned to the ground and Morton shipped back to England.