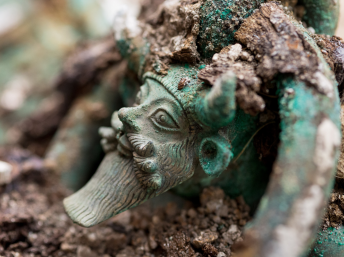 An attendee at our recent Lenaia celebration had an interesting question for me, “If we are calling Dionysos up from the underworld then how has he been able to interact with us these last couple months?”

According to the Bakcheion calendar Dionysos spends the Black Season, roughly from October to December, under the Earth resting in the lap of the Chthonic Queen. During this period he feasts with his deceased initiates, wearing the mask of the Fool. Much of this time is also spent in slumber, recovering from Oschophoria – the autumn harvest-fest where our Bull God is chased down and dismembered by his adversary, the Wolf Apollo. While he sleeps he dreams of his raucous and absurd adventures among the Harlequinade.

This is the hieros logos (sacred account) and nomos (custom; law) of our temple; there are folks within our own Starry Bull tradition (let alone the wider Dionysian and Hellenic polytheist communities) who believe and worship very differently. And as long as it fosters authentic connection with him there’s nothing wrong with that.

As a God Dionysos may also choose to interact with individuals and groups however he pleases*; furthermore, because of his particular form of madness Dionysos experiences time, space and reality very differently than we (and even many of his fellow Gods) do. All of the myths, legends and historical events in which he has taken part (and their various permutations) are occurring for him simultaneously.

Our calendar is an attempt to take that infinite flux and express it in an orderly and linear manner, albeit one with cyclical recurrences. Each of our festivals flow into each other, forming an overarching narrative which is further reflected in our system of seasonal associations. It is elegant and effective and even more importantly was born out of our experiences with him.

While Dionysos possesses complete autonomy and agency nevertheless certain patterns can be observed in his behavior. For some reason Dionysos tends to feel distant and diffuse after fall and into early winter; some describe him as cold, aloof, regal, chthonic, and even distracted or altogether absent at this time. Others get a weird, wild, playful, somewhat sinister Dionysos come through in ritual, dreams, visions and personal encounters with him. Over the years I’ve had both, sometimes even merging together into a complex if contradictory figure. And so we represent this with the Black Season of our year, and the festivals that fall during it.

Ever since the first of January we have been in the White Season, where Dionysos acts out the role of the Magician come from a strange and distant land, bringing wonders and radical transformation in his wake. He knows the songs and ceremonies to awaken and release, and he is followed by a triumphant procession of Nymphs and Satyrs whose ecstatic revelry chases off barrenness, stagnation and malignant or at least mischievous Spirits from the land and his people.

And we greet him in this form for the first time at Lenaia.

* It is also possible that during the Black Season we are only encountering the dream-form or eidolon of Dionysos, projected out into the world above while he remains comatose below. 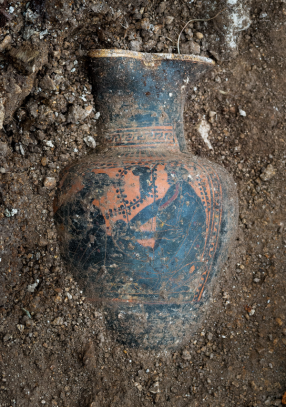