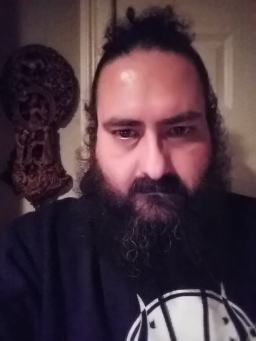 From The Invocation of the Black Sun: Alchemy and Sexuality in the Work of Coil by Hayes Hampton:

Crowley envisioned the highest level of initiation as the point where man, having dissolved his individual humanity, resolves into god, or what Crowley called “Unity…above all division.” Thus, Crowley’s magical system aims at psychic alchemy, using the aspirant’s habits, proclivities, and even resistance to change as transformative material. In his most complete statement, Magick: Liber ABA, in a chapter entitled “Of the Eucharist; and of the Art of Alchemy,” he describes the later, more painful stage of the process: “just as the Aspirant, on the Threshold of Initiation, finds himself assailed by the ‘complexes’ which have corrupted him … so does the ‘First Matter’ blacken and putrefy as the Alchemist breaks up its coagulations of impurity.”

Here Crowley writes of the nigredo phase of alchemy, which he often symbolized with a black dragon, though traditional alchemical literature more typically symbolizes it with the symbol of the black sun. Coil adopted the black sun as their logo and as a frequent lyrical image, using a drawing from Crowley’s Liber Arcanorum which can be viewed as a visual pun: both sun and anus. As a glyph joining the nigredo with elimination of bodily waste, the black sun combines two of Coil’s major tropes: the fragile, contingent nature of the individual self and the exploration (and alchemical use) of forbidden or rejected materials and sexualities. Stanton Marlan, in The Black Sun: The Alchemy and Art of Darkness, looks in depth at the black sun’s relationship to the alchemical nigredo and its metaphoric eclipse of consciousness. The black sun, in Marlan’s summary, brings together “blackness, putrefactio, mortificatio, the nigredo, poisoning, torture, killing, decomposition, rotting, and death … a web of interrelationships that describe a terrifying, if most often provisional, eclipse of consciousness” –that is, the dissolution of the mundane self both desired and feared by the magician, and the confrontation with the “dark forces” he or she must master in order to evolve spiritually. These “forces” were understood by twentieth-century magicians like Crowley not so much as external, demonic forces but as psychological negativity: shame, guilt, fear, and disgust.

For Balance and Christopherson, the “dark forces” included psychological negativity in the form of gay self-hatred and puritanical body-phobia and also what is culturally constructed as physiological negativity: blood, urine, shit, and (gay) semen — the ultimate forbidden substance of the 1980s, worse than crack cocaine. All of these substances, Coil’s work insists, travel along the subterranean rivers of our cities and our psyches, poisoning us unless we transmute their subtle energies. Coil’s debut album, Scatology (1984), which John Balance called “alchemy in sound,” explores the psychic and bodily terrain of waste matter. “Literally,” Balance told an interviewer, “some of the sounds — shitting and toilets –were … raw noises. Wewere making good things from what is perceived as being basically, bad things; dealing with subjects other people wouldn’t touch such as rotting and death.”

The black sun logo, prominent on the album’s cover, serves as a visual reference to other lacunae, holes, and forbidden spaces mentioned in the songs or in the album’s extensive liner notes: “The Devil’s Hole” that Charles Manson told his followers awaited them in the California desert, Salvador Dali’s “Humanism of the Arsehole,” the psychic and corporeal depletions of vampirism, gluteal injections of antibiotics to cure STDs, and, most memorably,the shit- and piss-spattered setting of “The Sewage Worker’s Birthday Party.”

Inauspicious as each of these may be, each also contains the possibility of transmutation; as Scatology’s liner notes summarize, “It is about performing surgery on yourself – psychic surgery— in order to restore the whole being, complete with the aspects that sanitised society attempts to wrench from your existence.”

9 thoughts on “each also contains the possibility of transmutation”