In Southern Italy the goose is one of the sacred animals of Persephone and often found accompanying her, as we see in this pinax from Lokroi Epizephyrii which depicts a maiden offering a rooster to the enthroned goddess while a goose flexes its wings beneath the offering table: 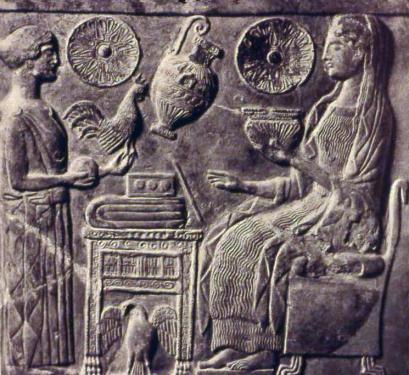 On an Attic red figure krater said to have been found in S. Agata dei Goti in Campania the goose has wandered into the andrōn where Persephone’s husband is hosting a symposion with Dionysos and his retinue (including a drunken Hephaistos and rambunctious Eros who is about to assault the poor goose) as the guests of honor:

This bird was so closely associated with Persephone that it figured prominently on her throne in the underworld:

Two more series, related to each other, also belong indisputably to the sphere of Persephone: the scenes depicting Hades and Persephone enthroned, and the ‘homage’ scenes in which various deities pay homage to an enthroned Persephone or to the enthroned couple. In the first series we find the following symbols and cult objects. (I) The cock (one is held by Persephone and another is standing under the throne). (2) The thymiaterion surmounted by a cock. (3) The stalk of grain (held by Persephone). (4) The phiale (held by Hades). (5) A blooming twig (held by Hades). (6) The throne with a back ending in a goose’s head. In the homage scenes the divinities paying homage hold attributes which identify them (e.g. Hermes the ram), or offer the cock or other objects appropriate to Persephone or the circumstances. The following deities appear in these scenes. (a) Hermes, always with a ram, and often presenting a cock to Persephone; he is sometimes accompanied by a female figure to whom I shall return below. (b) Dionysos, holding a kantharos and a vine, sometimes also accompanied by a female figure. (c) Apollo, in one type with a lyre, in the other with a lyre and a bow. (d) Triptolemos, holding a stalk of grain in one hand and with the other guiding the winged serpents of his chariot. (e) The Dioskouroi, who are represented as horsemen, sometimes followed by a female figure; they hold a cup or a kantharos and a shield or a lyre. Pruickner so recognizes Athena in one of the types. […] In the fifth group a girl carrying the peplos on a tray and followed by the phialophoros arrives in front of a seated deity who has her himation drawn over her head and is holding a cock; under her seat there is a hydria. This type would suggest that in this cycle at least the phialophoros figure is a priestess, while the goddess, shown as ‘ideally present’, is meeting the peplos-carrying procession. The final group’ shows a girl putting the peplos away in a chest which stands in front of a throne with a back ending in a goose’s head. Since this simple act is shown on pinakes, it must have had a religious significance. The peplos, the type of throne, and the kalathos and kantharos hanging on the wall indicate that we are still in Persephone’s cultic sphere. A mirror is also handing on the wall: we saw that this object had entered Persephone’s orbit. There is also a lekythos on the wall, but this conveys no information to us. The context indicates a sacred garment kept in a sanctuary; this, in combination with the peplophoria scenes, suggests an occasion of garment presentation to a goddess, a well-known ritual act in Greek religion. Zancani Montuoro suggested that we are dealing with the presentation of Persephone’s bridal peplos; she considered the whole nexus of scenes involving the peplos as part of Persephone’s theogamia, but was undecided as to whether these are cultic scenes taking place in the Locrian sanctuary or mythological ones, though she is inclined towards the latter view. (Christiane Sourvinou-Inwood, Persephone and Aphrodite at Locri: A Model for Personality Definitions in Greek Religion)

This is as close as I’ve come to finding an explanation for this bit of Magna Graecian iconography – until the other night.

I was looking through the Karaitos Catalogue of Heroines to see if I could track down any Dionysiac figures I wasn’t already familiar with (alas, none turned up) when I came across this:

HERKYNA (Lebadeia) a companion of Kore. She has a temple on the banks of the river of the same name (Paus. 9.39.2-3). It is unclear whether she received divine or heroic cult there.

Now Lebadeia is where the oracle of Trophonios was located and that has some intriguing parallels with Bacchic Orphic stuff since at various points in the katabasis ritual you had to drink water from Lethe and Mnemosyne. So I decided to refresh my memory and see what Pausanias had to say about her:

They say that here Herkyna, when playing with Kore, the daughter of Demeter, held a goose which against her will she let loose. The bird flew into a hollow cave and hid under a stone; Kore entered and took the bird as it lay under the stone. The water flowed, they say, from the place where Kore took up the stone, and hence the river received the name Herkyna. On the bank of the river there is a temple of Herkyna, in which is a maiden holding a goose in her arms. In the cave are the sources of the river and images standing, and serpents are coiled around their sceptres. One might conjecture the images to be of Asklepios and Hygeia; but they might equally be Trophonios and Herkyna, because they think that serpents are just as much sacred to Trophonios as Asklepios. (Description of Greece 9.39.2)

The only other information I could turn up on her was at Theoi.com:

Her name probably means guard-dog, from eruô, to guard, and kyôn a dog, or alternatively, she-who-wards-off, erukô. The story given by Pausanias, however, has it derive from herkos, a bird-catching net or noose. Herkyna appears to be closely identified with the goddess Hekate. Both were childhood companions of the goddess Persephone; and chthonian (or underworld) goddesses associated with dogs. […] Herkyna founded the worship of Demeter at Lebadeia, who hence received the surname of Herkyna. (Lycoph. 153, with the note of Tzetzes.) Herkyna was worshipped at Lebadeia in common with Zeus, and sacrifices were offered to both in common. (Liv. xlv. 27.) […] It appears that Pausanias has ommitted certain details of this story, which seems to be a local version of the tale of the abduction of Persephone. The goose appears to be the lure (rather than the usual narcissus flower), and the burried stream the entranceway to the upper world for the god Haides.

That conjures all sorts of associations with Acheloos and Euthymos, the latter of whom was linked with Persephone at Lokroi:

Many terracotta plaques featuring three female heads were found in the Grotta, sometimes with Pan and sometimes with Dionysiac symbols. This trio of heads is found in nymphaea, in Persephone shrines, and in tombs elsewhere in the Greek world, but in the Grotta Caruso an unusual combination occurs: sometimes the nymphs appear with a tauromorph, a bull with a human face and horns. The iconography of this figure is consistent with portraits of Acheloos or other river gods, and we have textual evidence that ties the Locrian one to a river. An inscription on one of the Grotta’s plaques names the bull-man as Euthymos, a curious Locrian hero. (Bonnie MacLachlan, Kore as Nymph, not Daughter: Persephone in a Locrian Cave)

This makes me curious – is the Herkynaean goose the one depicted in Magna Graecian art? And if so, how did it get there? Most of the Hellenic colonies in Italy were outside the Boiotian cultural sphere, so does that mean that this form of the abduction myth was at one point more widespread before being eclipsed by the ‘canonical’ Eleusinian version? One possibility is that it was favored by Orphics, since both locations betray a strong Orphic influence.